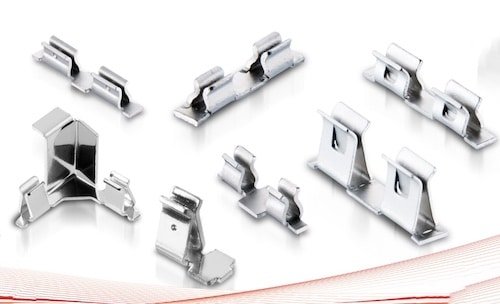 SMT Shield clips are metal clips suitable for all traditional shields, enabling EMC-compliant wiring and short low-resistance contact transitions. Generally, there are products that use wireless communication. Generally, a shielding frame is designed on the circuit board to isolate electromagnetic interference (EMI).

Now manufacturers have come up with the use of clips instead of shielding frames. This method not only can use SMT to make parts, but also has a small size, so it is not afraid of deformation. Its assembly is simple, and the shield clip provides maximum wiring convenience. The shield clamp can only be installed after the terminal strip is wired. The shield shield bracket can be snapped onto the DIN rail easily. With the integrated metal contacts, the ground potential is automatically connected to the neutral bus. Third, the shield clip can be easily and conveniently connected without using auxiliary tools.

Although the shield clip has many advantages and cost advantages, there are still many engineering issues that need to be clarified:

1. What is its holding force and how to calculate it will not fall during the drop test? According to the manufacturer’s answer, the holding force of each clip on the shielding frame is about 1 kgf, so the G value during the drop test is calculated. Then you can know how many clips are required for a shield frame. Generally, a shielding frame usually needs at least 4 clips to fix its position.

2. What is the adhesion of it to the board? According to the answer from Hexin shield clip, each clip can withstand a thrust of more than 5kgf, which should be sufficient to meet the current demand for consumer electronics.

3. Is there a suggestion for how far a clip should be placed? According to Hexin’s answer, taking a mobile phone as an example, a clip of about 25mm is sufficient.

4. Is there any suggestion for tin thickness? According to the answer from hexin manufacturers, the thickness of tin is preferably 0.1mm. If it is too thick, there will be a large gap between the shield frame and the circuit board, which will affect the effect of EMI.

Basically, we have designed a shielding cover clip at the corners, so that it is easier for the operator to accurately position the shielding can. Then also designed some grounded wiring in other places without shield clips, which can slightly improve the electromagnetic isolation ability of the shield cover. On the other hand, when the shield clip is invalid, it can be changed to a shield frame immediately without the need. Redesign the circuit board.